Everything began with Willard Libby in the late 40ies...

He is the one who developed the radiocarbon dating method in 1946 (LIBBY ET AL. 1949).
It is an analytical method to determine the age of organic material by considering the ratio of different carbon isotopes.
It is based on the fact that the stable isotopes of carbon C consisting of 12C and 13C as well as the instable carbon isotope 14C, which decays after the dead of a living being (with a half life time of almost six thousands of years), are in the atmosphere. These carbon isotopes are taken up by plants and animals and integrated into their tissue during their lifetime. The 14C/C-ratio in dead organic tissue gives information about the time of death of the plant or animal. This method is well known in archeology and suitable for long term age determination (ten thousands of years).

Then, the nuclear testing changed the possibilities of the radiocarbon dating method... 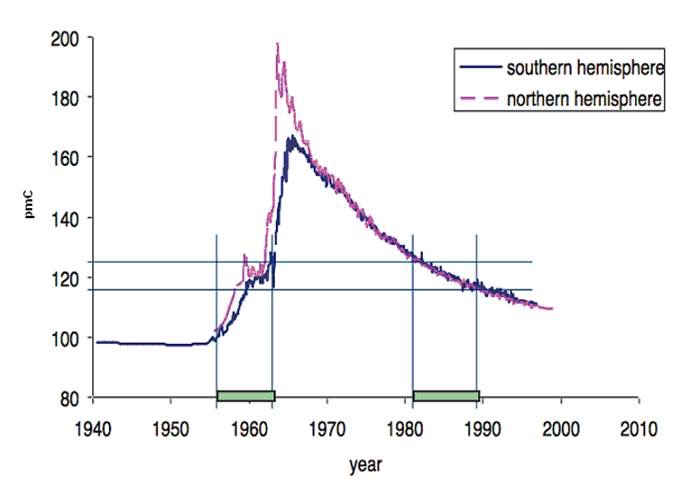 
This curve allows the determination of the age of organic tissues from living beings died in the recent past (1955 - today) and is therefore used as a forensic method.

However, the radiocarbon method itself was limited in accuracy and advancement was necessary...

The reason of this is the shape of the bomb curve, which allows two assignments of the time of death of the elephant for one 14C content. Additionally recent research showed that pre-convention ivory (before 1973) is no further distinguishable from new, e.g. freshly poached, ivory because the 14C concentration has already reached values as before the nuclear weapon tests (AUERHAMMER 2015). To determine the age of ivory with a satisfactory reliability, the radiocarbon method was further developed.
On behalf of this project, researchers of the University of Regensburg improved the radiocarbon method to determine the age of ivory by investigating further isotopes of the elements strontium and thorium (Schmied et al. 2012).